Spain During the Renaissance

During the 16th century, Spain dominated the world both politically and economically. Spanish design was a unique blend of Renaissance and Moorish design.

Spain’s Islamic heritage began with the Moors. The Moors were people from North African tribes. Its Islamic heritage helped to shape its history, culture, and design. For 800 years, the Moors and Christians struggled for dominance. By the 15th century, Christians had conquered the most territory and drove most of the Moors out. Spain’s present borders came about in the late 15th century. In the 16th century, Spain led the world in trade, exploration, and colonization. By the 1550s, Spain controlled most of South and Central America, Florida, Cuba, and the Philippines. Gold and silver discoveries in America brought wealth to Spain. In 1588, the English defeated the Spanish Armada, and brought an end to Spanish domination. Political ties with Italy brought the renaissance to Spain in the late 15th century.

Hispano Moresque reflected the Moorish architecture and decoration of Spain during Islamic domination. Mudejar appears after the conquest of the Moors by the Christians. Many Christian buildings used Moorish details. Mudejar was a decoration that combined Spanish and Islamic characteristics. Plateresque describes the transition from Gothic to Renaissance. Its low relief resembles silver work. It had two phases: Gothic and Renaissance. Isabelline or Gothic Plasteresque was the early phase. its form and motifs are determined buy gothic characteristics. Renaissance plasteresque was the later phase. It had more classical motifs. Classical Desornamentado or Herrean style demonstrates an understanding of classical design principles and order. Decoration was symmetrical and carefully proportioned. Decoration emulates high Renaissance forms. It dominated Spanish architecture in the 17th century. Churrigueresue or Baroque Rococo was named for the Churriguera family of architects. The style highlighted architectural ornament such as the inverted obelisk, stucco work, and twisted columns. Moorish motifs are geometric shapes, interlaced arabesques, and ogee arches. Gothic motifs include heraldic symbols, crockets, pinnacles, and pointed arches. Plasteresque motifs include decorated pigments, pilasters, baluster columns, and grotesques. Classical style decoration copied Italian Renaissance motifs.

Renaissance style began in Spanish architecture as plasteresque. It was a transition between Gothic and Renaissance. Its decoration was a combination of Moorish, Gothic, and Renaissance elements. Ornamentation was used on doors and sometimes windows. It is often complex and is layered within a grid. Decoration extends to the rooflines around portals. The Spanish Renaissance entered a more Italian like phase in the 16th century. Characteristics include symmetry, order, and proportions. Most structures reflected human scale. Spanish buildings include civic buildings, universities, churches, hospitals, palaces, townhouses, and rancheros. Most structures are designed for hot weather. They have small windows, flat or low pitched roofs, and patios. Churches were the dominant structure in the city. The front of most buildings were on narrow streets. Some public buildings and palaces faced squares or plazas. Most churches have Latin cross plans. Palaces and houses, however, were centered on patios for privacy. Rooms generally opened to outdoor spaces. Rooms are often long and narrow. Building materials include granite, limestone, glazed ceramic tile, sandstone, and brick. Classical style was marked by grey granite and white stucco. Wood was scare. The Spanish are known for wrought iron window grilles, handrails, and other decoration. Walls and openings are usually divided into bays and are symmetrical. Surfaces were plain until the classical period. Plasteresque or Classical decoration usually surround rectangular or arched windows that have one or two lights. Some windows have rejas or wrought iron grilles. Rectangular doors have carved wood panels. Roofs are flat or low pitched. 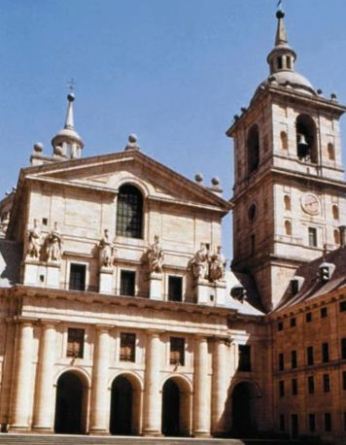 Interior ornamentation concentrates around openings. The most important rooms in private buildings are the entrance hall, main salon, dining area, and the bed chamber. Rooms had few furnishings. Colors were highly saturated. Colors used were reds, greens, blues, and yellows. Color appears primarily in tile work, textiles, and decorative objects. Plasterwork was usually white. Furnishings and ceilings could be a combination of natural wood, color, and gilt. Floors were made of brick, tile, or stone. Wood was used for upper floors. Woven mats and knotted pile rugs were used to cover floors. Walls were smooth white plaster. Earthenware tiles were used to highlight dadoes, door and window facings, window seats, stair risers, and interiors of wall niches. Dining rooms often have lavabos made of copper, pewter, or pottery that hang on the wall or are in a niche faced with tiles. A lavabo is a wall fountain that consists of a washbasin with flaring sides and an upper portion to hold and distribute water. Grand stairways were elaborately decorated. Aristocratic houses had wall hangings of silk, damask, and velvet. Some were embellished with embroidery or braid and fringe. Painted, tooled, and gilded leather were also used for wall coverings, because Spain is a leading center for leatherwork. The main wall of important rooms is usually dominated by large scale mantels. Occasionally, plasterwork is used to decorate chimneys. Portable braziers made of brass, copper, or silver are used to supply heat or supplement fireplaces. Yeseria or plasterwork can be used to frame windows and doors. Shutters and doors could be plain, carved, or painted. Occasionally heavy lambrequins and draperies were used on doorways of important rooms. Window curtains were rare. Ceilings were the focal point of most interiors. Most ceilings were pine. Ceilings in important rooms had elaborate geometric shapes. Beams and coffers could be plain or decorated. 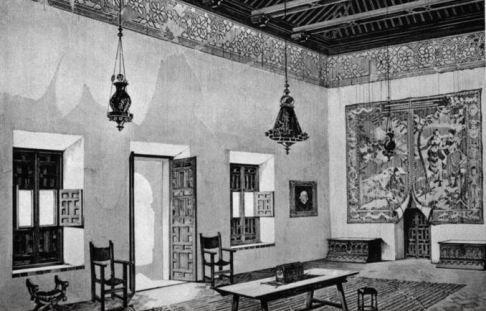 Spanish interiors used textile wall coverings, upholstery, and bed hangings. Bed hangings were made of silk, linen, or wool. Velvet and damask were used on the walls of important rooms. Armchairs and side chairs had leather, velvet, and damask seats and backs. Some chairs, benches, and stools were covered completely in fabric. Textile treatments of important beds were trimmed with lace, embroidery, fringe, or braid. 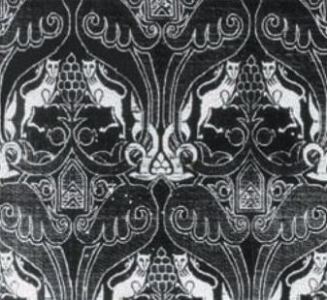 Torcheres or torch stands, hanging lanterns, braccios, candelabra, and chandeliers were common in all room types. Designs could be plain or elaborate. They were made of either wood or iron. 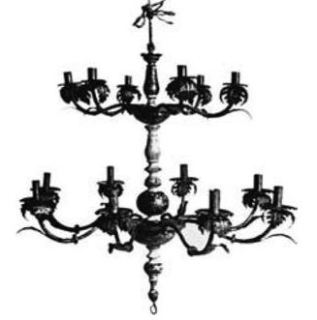 Renaissance furniture was simple in design and construction. Spanish furniture was much heavier than Italian or French. Ornamentation showed Moorish and Classical influence. The most important types of furniture were seating, chests, cabinets, tables, and beds. Walnut was the most used wood. Oak, pine, and chestnut were also used. Luxury furniture was made from exotic woods such as ebony and mahogany. Decoration includes inlay, carving, painting, and gilding. Bone and ivory inlays showed Moorish influence. Silver was also used for inlay and applied details. Seating includes the frailero, X-shaped chairs, the ladder-back chair, stools, and benches. Chairs were less common than benches and stools. Most chairs had medium-to-high backs with ball or leaf finials and spiral, baluster-turned, or quadrangular legs with stretchers. Trestle supports were more common than legs on benches and stools, and they could also have iron braces. Many rooms had built-in seating, and sometimes women would sit on cushions on a dais in the Moorish fashion. Most tables were constructed simply and were covered with carpets or cloths. Chests, built-in cupboards, the sacristy cupboard, the armario, and the fresquera were used for storage. Spanish beds had four plain wood posts and elaborately carved headboards. Some posts had spiral carvings. Other beds were made of iron and bronze. Small leather covered chests and boxes were used for decoration on tables. 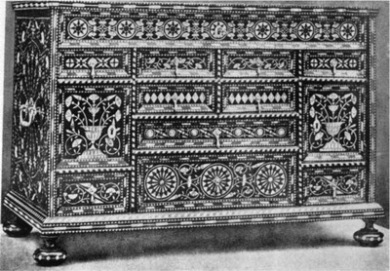 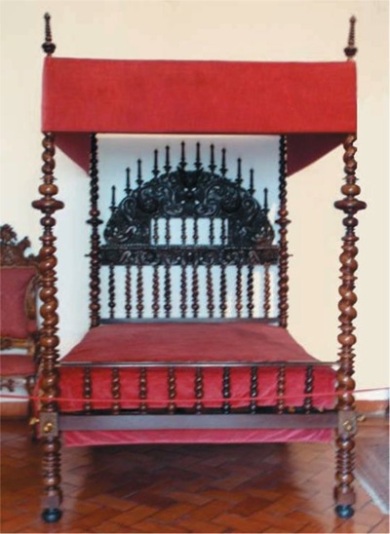 Spanish forms traveled to the Americas in the 16th century as abstracted and simplified renditions of their Mudejar, classical, and Baroque precursors in Mexico, Central and South America, and the southwestern and southeastern United States. Spanish Colonial Revival, beginning in the early 20th century, featured plain walls, tiled floors, and dark-beamed ceilings of the earlier period, but with the addition of plasterwork, decorative tiles, and arches and more and varied furnishings.